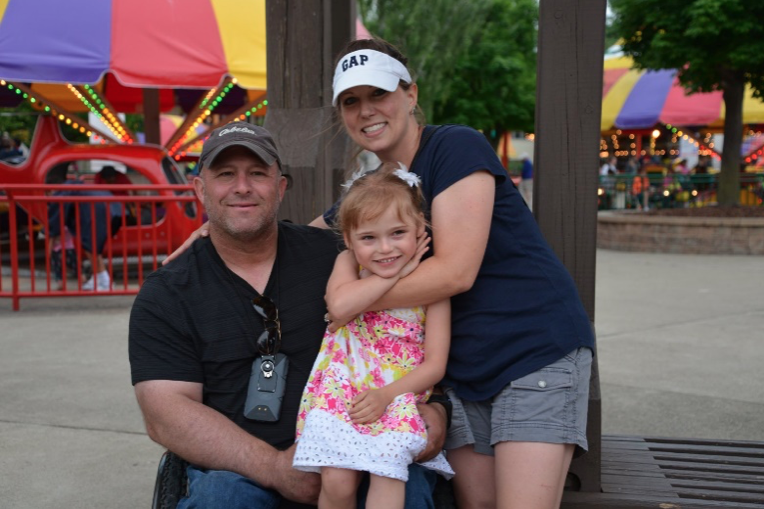 My husband and I were married in October 2002 with plans for a family in a few years after we had a chance to adjust to married life. Six months after the wedding he had an accident leaving him a paraplegic. Plans for children were halted while we adapted to the new life. In 2010 we decided that there would never be a perfect time to have a baby, so we started the journey.

After a struggle with infertility treatments, miscarriage, and IVF we finally got pregnant in 2012. Everything was going well until about 16 weeks into the pregnancy when we started having major problems. Sydney was born at 28 weeks gestation via emergency c-section. She spent 8 ½ long months in the hospital and eventually came home on a ventilator with a tracheotomy, oxygen, and a feeding tube. We were thrilled to have her home, but overwhelmed.

She made great progress at home and by 2 ½ years old she was free of all cords and tubes! Yay! Finally, a cordless baby! Sydney is a joy to be around and is almost always happy. I have never met a child like her. She is so unique and special in so many ways.

Despite her progress with her general health, Sydney was still struggling with severe developmental and speech delay, so we sought the help of a developmental pediatrician. He diagnosed her with Autism at 3 years old and we started another new journey.

Sydney made wonderful progress while enrolled in the ProMedica Autism Early Learning Program which was year-round and full day but aged out and had to transfer to another program last year.  The new program with full day service at New Horizon’s Academy in Holland is only available during the traditional school year of mid-August through late-May. Like most other children on the spectrum, Sydney thrives with routine, structure, and consistent programming. I feared that taking an extended summer break would cause her to regress significantly. Fortunately, New Horizons helped create a plan so that Sydney could attend their summer program, with a schedule that best suits her development, so we no longer had to worry about her missing out. The Suzanne Tyner Autism Assistance Fund helped make it financially possible to enroll her in the program.

Sydney’s mom concludes, “I was so anxious about this summer as it was the first time that I could not find an appropriate program for Sydney. After such a stressful year of off and on virtual school, the idea of her missing an entire summer of programming had me nearly in tears.

Finally, an opportunity presented itself, but the cost made it beyond our reach. I have never applied for funding through Avenues for Autism and had no idea what to expect. Especially after 2020. I was thrilled to find out that they were not only able to help, but they provided funding for over half of her tuition!

I am extremely grateful and humbled to receive this gift to our family. Thank you, Avenues for Autism!”